Play Against Your Friends!

Many players of this game requested we offer a multiplayer version of Uno, so we released Uno With Friends. Play against your friends, classmates, family members, and perhaps a few enemies you would like to beat. Play online for free using nothing but your web browser. 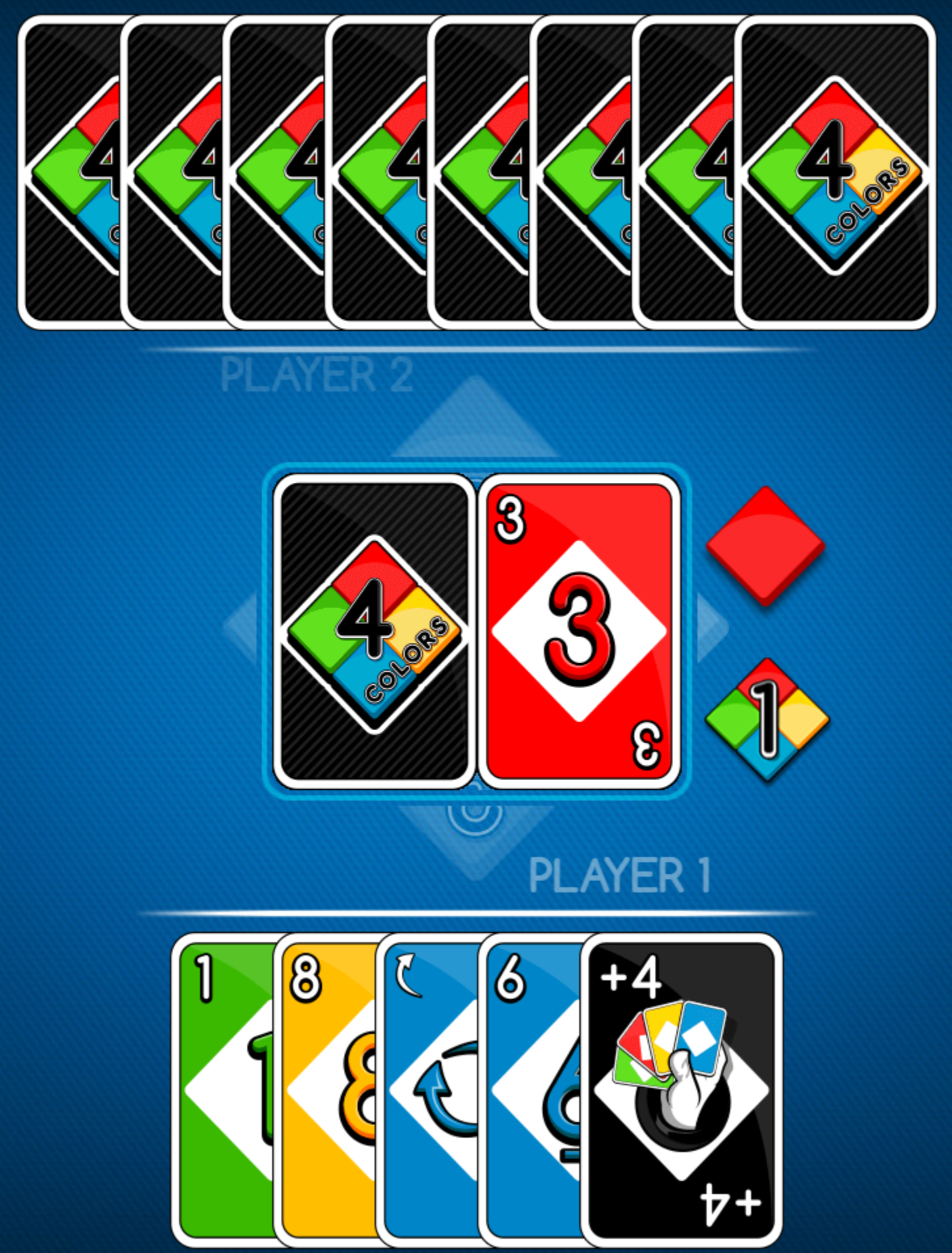 This is a popular card game for kids where each player tries to run out of cards first.

Players can select to play against 1 to 3 competitors. The goal of the game is to lay down all your cards first.

If you can not match either then you are forced to draw another card. The card you draw from the reserves may be laid to the waste pile before your turn ends.

If you have a play you can make you must make it rather than drawing another card without making the move.

If the entire deck is used during play the top card on the discard pile is set aside and the remaining cards are shuffled to recreate a new deck to pull cards from. Play then continues normally.

Immediately after laying your second to last card you have to click the 1 button on the screen or else you will be dealt 2 more cards.

There are a number of special cards including a color wildcard, cards which force competitors to pick up more cards, and cards which reverse direction of the playing field.

When you have many cards in your hand try to play cards which are the most over-represented so that you have a diversity of lay options possible.

For example, if you have 7 cards and 4 of the cards in your hand are red you would likely to want to lay a red card if you can.

Similarly, if you have 7 cards and 3 of the cards are valued at 5 you would want to lay one of those fives if you can.

If you keep multiple colors and numerical values in your hand until you have few cards left you increase the odds you will be able to make a play on the next hand.

If you are fairly certain what color a player with 1 card left is holding you can intentionally make a suboptimal strategic play for your hand to try to prevent them from being able to win the game. For example, if they have 1 card left and you believe it is yellow you could throw a blue 4 on a yellow 4 even if you were holding multiple other yellow cards in your hand.

The action cards are exceptionally powerful when you play against a single computer opponent because whenever you reverse the deal direction, skip their hand, or deal a +2 or +4 wild card it is your turn once agian. Dealing them multiple +2 or +4 cards in a row puts a lot of points in their hand while clearing cards out of your hand.

Winning a hand is called "going out" and is accomplished by getting rid of all your cards.

Only the winner of the hand scores points & their score is based on the sum of the value of cards held in the hands of losing players.

If a player goes out using a Wild Draw 4 or a Draw 2 card the next player must accept those cards into their hand for computation of total points.

Hands are repeatedly dealt until a player reaches a cumulative game score of 250 total points or higher.

The star near each player indicates how many points they have scored from prior hands.

In addition to the online multiplayer version of this game mentioned above, we also offer a near-identical version of the game on this page with monument pictures on the cards. That game is named Four Colors Monument Edition.

American barber Merle Robbins invented the game in 1951 to help explain Crazy Eights to his son Ray. Mr. Robbins took out a mortgage on the family home to raise $8,000 to print 5,000 decks of the card game. He sold the decks in his barber shop while his son shared them with students at school. In 1972 International Games acquired the rights to the physical card game for $50,000 plus royalties of 10 cents per copy sold.

The deck comes with 108 cards:

The game originally had a scoring goal of 500 points.

Using the print cards there are 3 additional house rules options players can choose to incorporate into gameplay.

The Enduring Popularity of Uno

The official rule book for Uno is published online at service.mattel.com/instruction_sheets/UNO%20Basic%20IS.pdf

The simplicity of the game makes it a family favorite to share nostalgia and experiences between generations, making the game popular over a half century later.

The game is so popular that most of the variations mentioned above have hundreds to thousands of reviews each, with the core game having over 43,000 Amazon reviews. In May of 2022 the game was ranked as the #1 dedicated card deck game on Amazon.com, and was #37 in the broader toys and games category.

Sold out versions of the co-branded game promoting Gary Vaynerchuk's VeeFriends have sold for over $300 on eBay, even though the original price on Mattel's website was $25.

Click the following links to explore Uno card games on Amazon or eBay, or go to the Mattel Creations website to see which new exclusives they currently have for sale.

You may play the game on this page embedded in the above iframe or click here to view it in a separate browser window by itself.